Before I go any further I want to just explain one thing to anyone reading this who wasn’t lucky enough to grow up eating tablet, you have probably seen tablet called fudge or Scottish fudge in tourist shops. Tablet is absolutely not fudge. Although fudge, tablet and toffee are all made with similar recipes, they have a very different texture. Tablet is brittle, but soft and melts in the mouth. It’s not chewy at all. It’s slightly grainy in texture and very sweet. Did I mention yet that its super sweet? And it melts in the mouth. Heavenly!

When you mention tablet, almost everyone in Scotland has a story of a legendary family member who made the best tablet, I learned today that apparently, my gran made tablet but I don’t have any family recipes so wasn’t aware that she had (my gran died when I was about 4 so I don’t really remember much of her).  Luckily though, Kate’s mum was the tablet legend in her family, and Kate’s dad happily shared her recipe with us. Talking about traditional Scottish recipes though, Kate’s mum’s recipe is written in a school book (we call these jotters, school jotters), which is where her dad found it. Given that Kate’s mum would have been 73 this year, that’s an old school jotter and a proper old recipe 🙂

So a massive thank you to Mike for sharing this.

Recipe exactly as it was written (in old measures)

Method
Put sugar, milk and butter into a pan, stir with a wooden spoon until sugar dissolves and bring to boiling point; add condensed milk slowly and boil steadily for  10-15 minutes.
Add Vanilla essence, remove from heat and stir well with wooden spoon until thick.
Test for suitability for pouring by putting a little of the mixture into a small bowl or cup of cold water, if ready it should form a soft ball.
Pour into a greased tin. Mark when set but before it cools.

It took me a couple of attempts to get this right, the first attempt I got too hot and it became toffee. So to try to help you, here are my directions.

Bring the sugar, butter, and milk to a boil slowly, stirring constantly.  You want to give the sugar time to dissolve, and you don’t want the mixture sticking to the bottom of the pot so keep stirring. Once it’s boiling, slowly add the condensed milk and keep stirring. 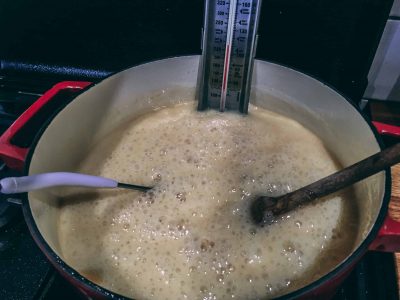 Now once you get the mixture boiling again, and of course keep stirring, you want to get the temperature up to around 118C, this took me 15 minutes but the time will vary determined by your cooker. You can see in Kate’s mum’s instructions that she talked about testing the mixture by dropping it in cold water. I went with the thermometer method as it seemed a bit more reliable.

The mixture will darken as it heats and thickens slightly.

A word of warning, use a very deep pan, with a heavy bottom. This mixture bubbles furiously when boiling and increasing in mass by about 2 thirds.

Once you have the mixture up to temperature, take it off the heat and add the vanilla essence. Be warned, however, this will cause the mix to froth, so be careful.

This is where the hard work starts, keeping it off the heat, either with a wooden spoon or with an electric whisk, beat until the mixture thickens. This took 5 minutes with an electric hand whisk. 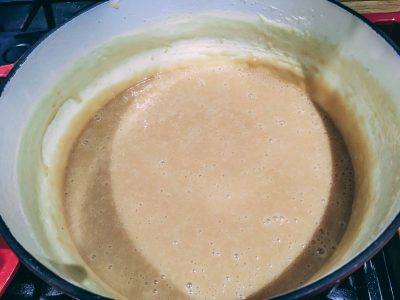 Now pour it VERY CAREFULLY into a greased baking tray and leave to cool completely. It will harden and set. 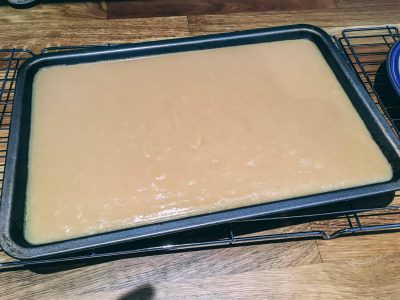 Once its cool, you can cut it into small square portions. Remembering that this is just sugar and fat, make the portions small. This is definitely no health food! 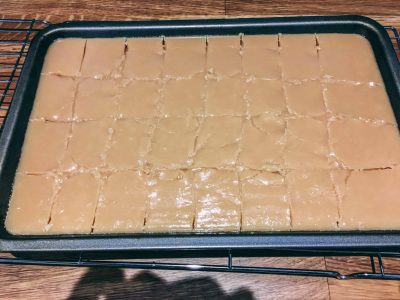 There you go, Scottish tablet. 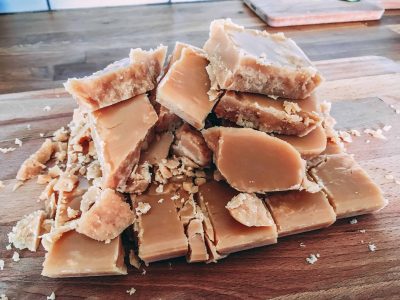