Making my own kanelbullar

I’ve always been a huge fan of what I call cinnamon swirls (kanelsnegl, in Danish they are called cinnamon snails), you know, the Danish pastry type treats where a mix of cinnamon, butter, and sugar is swirled inside a roll of flaky, sweet pastry? I love them, but on a recent trip to New York, we discovered another version, the kanelbullar. Simply, a cinnamon bun, traditional in Sweden. They even have a national cinnamon bun day (Oct 4th), why don’t I live in Sweden?  I have completely fallen in love with these and have been trying to get the perfect recipe ever since.

They are a perfect treat with a cup of tea or coffee for those cold, fresh winter weekends when you just want to curl up inside with a book and I thin they are about to become our latest christmas day tradition.

The recipe is getting there so I thought I’d share with you guys, and even better, this is a chance for you to practice your sourdough skills on something other than a loaf of bread.

Ingredients – for the dough

Ingredients – for the filling

You are making an enriched bread dough, so add all your ingredients to your big mixing bowl and get to work bringing it together with your hands until it’s a nice ball of dough.

I’ve found when working with sourdough, that the water content of the starter varies, so don’t add all the milk in one go. Add a bit at a time until you have a good dough consistency, you may not need all the milk. You want the dough to be firm but not too dry.  A wetter dough makes for a lighter finished product.

Once you have the dough ready, get kneading. Give the dough a knead for about ten minutes until it’s soft and springy to the touch.

If you aren’t sure about kneading, there’s a handy “how to” video over on our YouTube channel.

Once you are happy you have a lovely springy dough, put it back into the bowl, cover with some clingfilm and leave it in a warm room to rise. You want it to double in size, this can take anything from an hour to all day. As we are using sourdough for this recipe, it’s more likely to take all day, but just keep an eye on it.

Once the dough is ready, you want to roll this out to about 3 or 4mm thick, into a rectangle. Or as near to a rectangle as you can.  I have never once managed to get any dough to be a nice neat rectangle without serious coercion, so just get your best approximation of a rectangle.

Now it’s time to get the filling ready.

You need to cream your butter and sugar together until its completely combined and super soft, then mix in the cinnamon. This doesn’t look attractive in your mixing bowl, I admit, but just trust me on this one, it will taste divine.

Ok, I will not lie to you, this is the tricky (read impossible) bit. You need to spread that lovely filling all over your rectangle of dough. Sounds simple enough right?

Every recipe I’ve seen, every video I watched, they all spread the filling really easily using a pallet knife or a spoon. I am sorry, but this beautiful pillowy, soft dough does not want the filling spread on it, no matter how soft I went, no matter what implement I used… the dough moved and the filling stayed put.

So… here is my top tip, just use your fingers. It’s messy but it works! 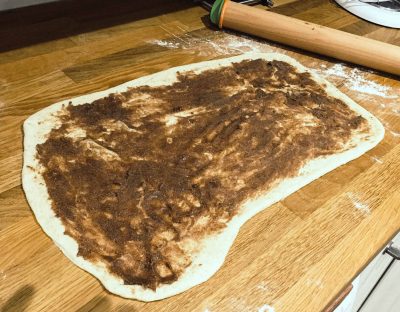 So now that the drama of trying to spread the filling is over, time to make those fabulous little knot shaped buns. You start by folding the dough over itself, so basically you are folding it in half, lengthways. Not sure if that is the right description, but basically fold along the short end so you still have a long, but now thin rectangle.

Now cut that rectangle in half to create two squares (or as near to squares as you were to a rectangle at the start).

Then again cut in half, and again until you have some thick little rectangles of filled doughy goodness. Which you are going to cut again, but this time not all the way through, kinda like you are giving them little legs. 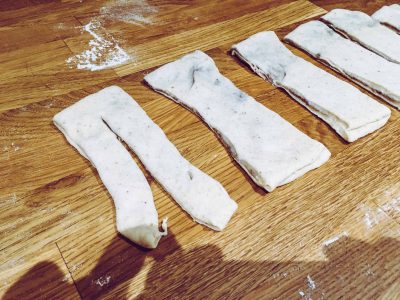 I have no idea how to describe the result to you, so here’s a picture! Make this 🙂

The next maneuver is again difficult to explain, but basically take one twisty leg, and wrap it around in a semi-circle. Like left twisty leg goes around the left and joins the top of the dough. Next, take the right twisty leg and pull it over the top and tuck it underneath at the top. 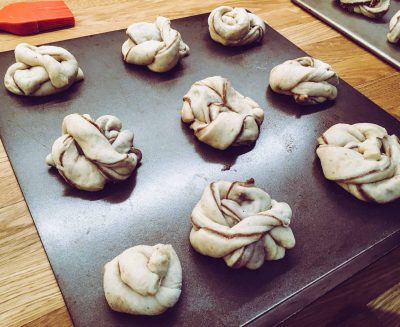 Little knot like buns created, its time to leave them to rise again. You got it, you want them to double in size.

The last stage, when they have doubled, get that oven preheated to 180 C, and while that’s heating, beat your egg and brush it over the buns, this makes a nice shiny finish. At this stage, if you wanted to you can even add some sugar nibs to make them pretty. 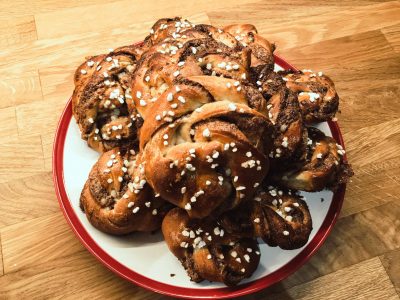