We realised today that we hadn’t shared this recipe with you guys and were astounded. It’s so easy to do and gives you not only a fantastic dinner but options for sandwiches and leftover meals too. The ham is cooked in the slow cooker so there is almost no work for you to do, switch it on, make some coffee and go watch that box set of “The West Wing” for six hours. Easy peasy (and that’s exactly what we are doing today as it cooks).

We first did this as a dinner for christmas, we wanted something different, something we’d never done before and decided on a ham, but we didn’t want lots of stress on christmas day, cause lets face it, there is lots of good tv to be watched, so we hunted for something simple and delicious. From that search, a few recipes came to light and we took the bits we fancied from them all to make our christmas ham. It’s apparently a Swedish style recipe originally and funnily enough, a christmas tradition called Julskinka.

The basics –  Cooking your ham

You need a ham, we go with an unsmoked gammon joint. Unsmoked because there are going to be other more subtle flavours in there and we thought the smoked flavour would overpower things. It might seem an obvious statement, but you need it to fit in your slow cooker, so as we say in Scotland, don’t let your eyes be bigger than your belly.

Firstly, very roughly chop an onion and put this in the base of the pot, this stops the ham being in contact with the bottom and reduces the risk of it scorching.

Ham… cut off the layer of fat from the top. Some folk do like to leave this on and get it crispy when they roast the meat, but we aren’t fans so we cut it off and then put the ham in the pot on top of the onion. 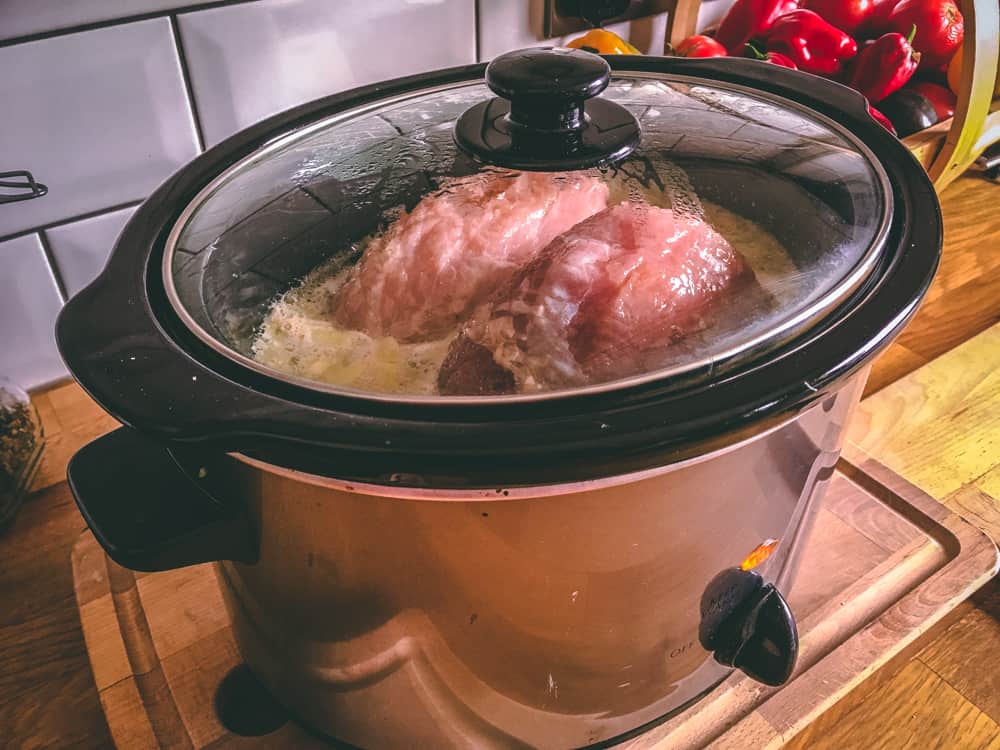 Now for the flavour bit, ginger beer. Yup, a big bottle of ginger beer. It isn’t so common to cook meat in fizzy drinks but its popular in the US and apparently some other countries, but new to us, trying to describe this too you is way more difficult than you realise. I grew up on the west coast of Scotland so we actually call this ginger, a bottle of ginger. We call all fizzy drinks ginger regardless of what flavour they are, I have no idea why but cola is called ginger, lemonade is called ginger, ginger beer is called ginger. Kate grew up on the east coast so she would call this juice or fizzy juice. Again regardless of the flavour or brand, its juice. Elsewhere in the UK, you’d hear it called pop and in the US soda. So basically whatever you call it, top up your pot so that the liquid (ginger beer) comes almost to the top of the ham, next add a big tablespoon of mustard and about a thumbs size pieces of grated ginger. Give it a good old stir, set the heat to low, put the lid on and go off and forget about it for five-six hours.

I mentioned earlier that some folks cook a ham and for them, it’s all about getting that fat on top to go crispy in the heat of the oven, well instead we are making a crunchy crumb topping out of…. ginger snap biscuits. Yup!

For the topping you’ll need:

Now put the ham in a preheated oven at about 220C for 15 to 20 minutes to get everything nice and crunchy.

Once you are happy, remove from oven and cover loosely with tin foil and let it rest for 10 minutes.

It should be soft and pink and delicious. Carve it up and nom!