It feels like forever since Kate and I had some garden time. It’s been a mix of my very intense studies, which pretty much take up all of my time and the fact that the weather has been pretty awful, but now that my studies are over for the summer and finally, finally the sun is peeping out a little, we are getting some bits and pieces done. We don’t have any major projects planned for this year, as we knew time would be precious, but we’ve got a couple of new plants in so still a bit of fun and excitement.

Last weekend was the first day where it was actually warm enough to spend any time in the garden without a jacket, hat, and gloves. Seriously, I’m not joking here. So we made the most of it and got the various baby plants out of the greenhouse and into their finally snuggly beds for the coming year. This meant mostly the hanging baskets and the greenhouse quadgrow and chilligrow systems. 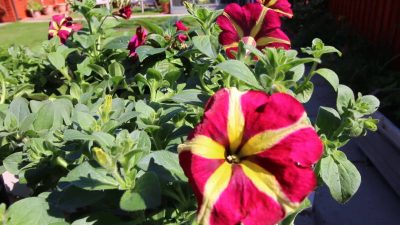 This year’s hanging baskets are a bit of a mix, with the baskets on the fence and the shed being begonias and those on the house our usual petunias. Already the petunias are flowering and looking great, but it will be a good while before the begonias catch up I think, they are still tiny.

We had such a fun day though, normally with so much work to do there is a bit of divide and conquer. This year, however, Kate and I got to work on things together, potting up, copper tape and all.

The greenhouse quadgrow systems which were such a hit last year are back in play with tomatoes (as normal) and peppers. We’ve never tried peppers before and to be honest we’re not even sure they will work as Scotland is generally not great for sunshine but it is fun to try these things. Something we did this year though, after our experience of cleaning the greenhouse at the end of last season, I was amazed at how many slugs had taken up home in the quadgrows. So this year, we’ve added some copper tape to them in the hope that it will deter the slugs, I’ve already noticed though, that the copper tape doesn’t seem overly happen in the warm moist environment of the greenhouse… we’ll just have to see. 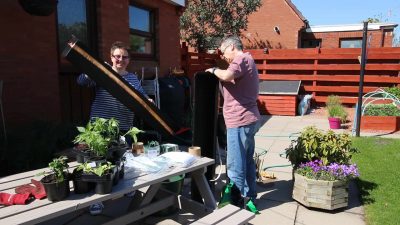 Another new plant for this year is Cornichon de Paris. Basically little gerkins. We’ve put these in one of the chilligrows but to be honest, we’re pretty much riding by the seat of our pants here as we have no idea about these, it’ll just be fun to see what happens. The hope is that we’ll be able to pickle these for our own gherkins instead of buying jars of these as we do now. 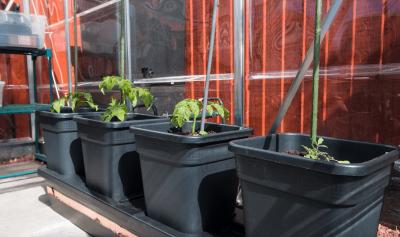 There’s still a fair bit to do but we got enough done to allow us to take a wee bit of a break, in the form of a short jaunt across the pond for a few days in New York. Thanking my lucky stars for the quadgrows otherwise, I’d come home to dead plants 🙂 but when we come back, there is netting to fix on the raised beds, some salad to sort and hopefully the peas will be a bit bigger by then, wee toots!

If you want to laugh at us potting up hanging basket at 300 speed, check out our May update on the Youtube channel