The HotBin composter – so what do we think 6 months on?

It seems like forever since we last spoke about the hotbin composter we are using, back then we were mostly telling you about how we were still trying to get to grips with things and how we hadn’t yet managed to get the balance right which would see the bin hit the advertised temperatures.

The big claim of the HotBin is that it composts at such a high height (60C) that you can have compost in as little as 3 months. It’s also a nice neat design and doesn’t require the physical work of turning and care that a traditional compost pile requires. 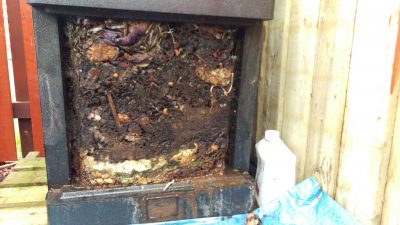 ur issues originally had been that we just didn’t have enough waste material to get the bin running and then keep it running. We were seeing the bin get up to around 30C at the most but even then, the mix of materials we were using meant that the compost was really wet and dense.

Since then, we have made an effort to make sure we are balancing the kitchen waste, garden waste, bulking chips and paper to make sure the moisture content was right and there was oxygen getting around the mix and it really has made a difference.

Also with it now being spring, we have more garden waste to add, meaning the bin is being topped up more regularly all of which means we are definitely seeing those 60C temperatures and sometimes above.

There have been times where opening the lid, and getting a blast of steam in your face is akin to a facial!

So what about the compost? Last time around, the compost was really wet and dense and not 100% composted yet, I can’t say yet quite what difference we’ll see, but I plan to give it another couple of months before checking again.

So far though, it’s all working as advertised and it’s so much neater and easier than the old pile so a plus so far.